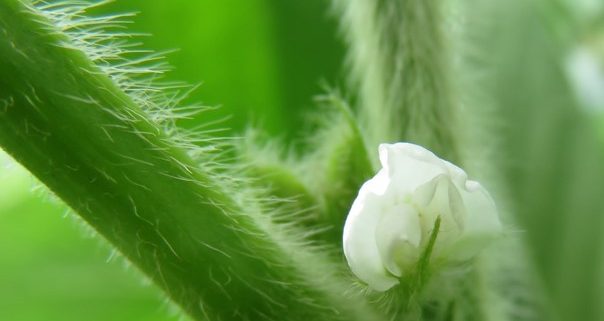 We are starting to get the many reports of soybean beginning to flower (R1) in our early planted situations. As we enter the soybean reproductive growth phase there are a few things to keep in mind. The first is that soybean will produce flowers for ~3 to five weeks, depending upon planting date and environment. During that time soybean will abort anywhere from 20 to 80% of the flowers that they produce. Generally it is the first and last flush of flowers produced that are most likely to be aborted.

Next, the timing window for many POST-emergence herbicide applications in our early planted soybean are quickly closing if not closed already. Glyphosate labels indicate that applications can be made through R2 or full flower, however the spread of glyphosate-resistant waterhemp and other weeds across Wisconsin and beyond has led several farmers to adopt soybean varieties containing the novel herbicide resistance traits (Xtend [which confers resistance to glyphosate and dicamba],Xtendflex [which confers resistance to glyphosate, dicamba and glufosinate], Enlist E3 [glyphosate, glufosinate and 2,4-D] or LibertyLink GT27 [glyphosate and glufosinate]), which all provide effective herbicide options for POST-emergence broadleaf weed control. The application window for the POST-emergence herbicides associated with the aforementioned traits is also linked to soybean reproductive growth stages.

In Xtend systems, the registered dicamba herbicides Engenia and XtendiMax with VaporGrip Technology can be applied in Wisconsin until June 30 or up until R1 (first bloom; in other words, don’t apply if the soybeans are flowering), whichever comes first. Tavium plus VaporGrip Technology may be applied through the V4 growth stage or prior to June 30, whichever comes first.

In LibertyLink systems (LL, LLGT27, Enlist E3, or XtendFlex), glufosinate herbicides such as Liberty, Interline, etc. can be applied up to bloom or R1 growth stage (don’t apply if the soybeans are at R2 stage or advanced).

In Enlist E3 systems, the registered 2,4-D herbicides Enlist One and Enlist Duo should be applied through R1 growth stage.

Adjust Your Seeding Rate (Higher) But Not Your Maturity Group For Late May Planted...