Blog
You are here: Home / Blog / Uncategorized / How Long Will Soybeans Survive Under Water?

Soybeans can generally survive for 48 to 96 hours when completely submersed. The actual time frame is dependent upon air temperature, cloud cover, soil moisture conditions prior to flooding, and rate of soil drainage. Soybeans will survive longer when flooded under cool and cloudy conditions. Higher temperatures and sunshine will speed up plant respiration which depletes oxygen and increases carbon dioxide levels. If the soil was already saturated prior to flooding, soybean death will occur more quickly as slow soil drainage after flooding will prevent gas exchange between the rhizosphere and the air above the soil surface.

As a personal frame of reference we were in a wheat field today that was flooded over the weekend and we could already smell rotting tissue. That is not a good sign. 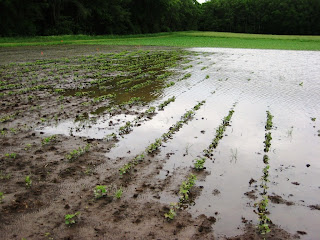