Blog
You are here: Home / Blog / Uncategorized / A Snap Shot of Argentina Agriculture

Paul and I had the opportunity to spend the last week in the Pampas region of Argentina with fellow scientists Seth Naeve (Minnesota), Palle Pedersen and Jason DeBruin (Iowa), and Chad Lee and Jason Sarver (Kentucky). During this time we had an opportunity to meet with several growers, agricultural agencies, ag service organizations, seed companies, farm managers, and university researchers. The following article is not meant to be a thorough analysis of Argentinean agriculture, but a compilation of our observations. 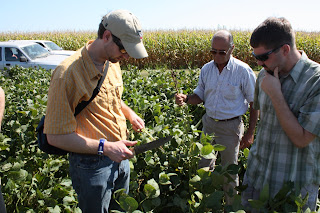 In some ways Argentina is not that different from production in the Midwest. The cost to purchase or rent highly productive land is similar to what is paid in the U.S. Many of the growers we spoke with emphasized the use of rotations, sustainability, and managing the land for their children’s children. They also spoke of low profit margins and stability of their market given high input prices and dropping commodity prices.

It was described to us by many that the typical Argentinean producer owns ~20% of the land they operate and leases 80%. Most growers do not live on the land that they operate. They live in the city and own very little equipment, therefore, grower’s contract out almost all of their operations (planting, spraying, harvest, etc.). It was interesting to note that two separate individuals asked if U.S. farmers really live on their land like in the movies.

Argentinean growers are very proud of their movement into no-till production systems and know what year they made the transition for every farm they run. 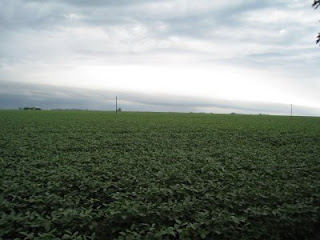 Given their latitude (approximately from about Indianapolis to Mexico City as a frame of reference) crops are relatively insensitive to planting date. They manage their rotations, plantings of soybean maturity groups, and corn hybrids around annual rainfall patterns. The three most common rotations we experienced were corn, full season soybean, and wheat double crop soybean. Most growers we spoke with would like to be on a 1/3, 1/3, 1/3 rotation. They feel this provides them with a stable rotation that maximizes productivity and hedges against risk. However given the estimated return per acre for corn it is little wonder why we saw the number of soybean acres planted as we did.

The most common estimate for new soybean seed planted annually was ~20%. The remaining acreage of RR soybeans planted is bin-run. The reason most cited for relying on bin-run seed is the “retentions” that growers pay on soybean. To our understanding this is a flat fee of 35% on all soybeans sold. To our understanding, these “retentions” support social programs in Argentina. Additionally, growers also pay sales taxes.

For the regions we visited the full season soybean was a late 3 maturity group whereas the double crop was an early to mid 4. Corn was typically a 110 to 120d relative maturity. To the best of our knowledge, wheat production is a hard red spring wheat with a growth habit similar to that of winter wheat. 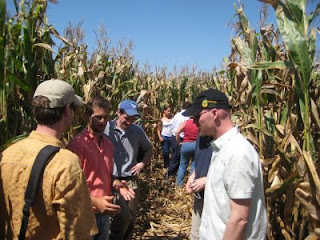 It was quite interesting to note that all of the growers we spoke with do not see U.S. farmers as a competitor per se, rather they indicated that they strive to emulate U.S. production systems. Based on all of our conversations, the number one question that we received had to do with what U.S. growers were going to do next year: hold soybean acres or plant more corn.

Overall, we would strongly encourage any grower to take the opportunity to visit Argentina for themselves. We guarantee that the trip will be worth it.

Lastly, we very much would like to thank our host, Lucas Borras, plant physiologist with the University of Rosario for his tireless efforts in developing this program, serving as interpreter and host.