The winter wheat is rapidly advancing around the state, based both on our observations in the field as well as from reports around the state.  It is very important that you closely examine the growth stage if considering the application of a foliar fungicide.  For example, when we examined the winter wheat variety trial at Lancaster today, wheat ranged from Feekes 10.4 (heads approximately 3/4 emerged) to Feekes 10.5.1 (anthesis) (Figure 1).  Many fungicides that are used for control of foliar diseases, including Headline, Quilt, Quadris, and Stratego, for example, are only labeled until Feekes 10.5 (full head emergence).  Applications made after this growth stage are considered off-label. 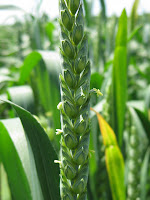 Figure 1. Wheat head showing evidence of flowering. This image was obtained on 3 June at the Lancaster ARS Winter Wheat Variety Trial. Image courtesy of Karen Lackermann.
Furthermore, pay particular attention to the severity of the different wheat diseases and on which leaf symptoms are observed.  As we have recently discussed in the blog and the Wisconsin Crop Manager, the decision to consider a foliar fungicide at this point in the growing season for diseases like powdery mildew, septoria leaf blotch, and wheat leaf rust should be focused on the upper leaves. Also, make sure that you properly identify diseases, as we have seen some virus symptoms like Barley Yellow Dward Virus in plots (Figure 2). Foliar fungicides are not effective against viruses. 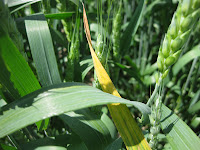 Figure 2. Symptom of Barley Yellow Dwarf Virus. Image couresty of Karen Lackermann.
Fusarium head blight update:
As we move into flowering, remember that this is the critical period for infection by the pathogen that caused Fusarium head blight.  From the initial phase of flowering to the end of flowering takes approximately seven days.  Based on recent weather conditions and the Fusarium head blight prediction center, the current risk for Fusarium head blight (as of June 3) is low across the state in Wisconsin.
We have also received some questions as to the current situation around the U.S.  Our situation in Wisconsin is much better than other parts of the country, as the severity of Fusarium head blight further south, starting in southern Illinois and running into Arkansas and Kentucky, in particular, is high and there are concerns regarding the risk of high DON contamination.
/wp-content/uploads/sites/3/2017/10/coolbean.png 0 0 earthling /wp-content/uploads/sites/3/2017/10/coolbean.png earthling2009-06-04 02:10:002009-06-04 02:10:00Pay Attention to Wheat Growth Stages
0 replies