Blog
You are here: Home / Blog / Uncategorized / Preliminary Scab Results – Winter Wheat Variety Trials
During this past week, Karen Lackermann (MS Student in Plant Pathology) collected field data to estimate the incidence and severity of Fusarium head blight in the Winter Wheat Variety Trials in Wisconsin. This work is a part of our program to develop an integrated management platform for wheat disease management in Wisconsin. Data were collected on a plot basis, with 100 heads assessed per plot (50 consecutive heads in one border row; 50 consecutive heads in the second border row). Incidence was defined as the presence of Fusarium head blight on a wheat head, while severity was based on the rating scales of Engle et al. and Stack and McMullen. In addition, an index value was calculating as percentage incidence x percentage severity and dividing that number by 100.
Preliminary results:
On average, FHB was low across the variety trial locations (Figure 1) in Wisconsin. The highest levels of scab (incidence, severity, and index) were observed at the Lancaster trial location, however, even there, the index values were less than 5%. A more formal analysis will be shortly conducted and summarized for the variety trial book. Furthermore, post-harvest testing of grain for evidence of Fusarium graminearum and DON will be conducted.
Figure 1. Incidence of Fusarium head blight at the winter wheat variety trial locations in Wisconsin. The scale for incidence (y-axis) is 0-100%. 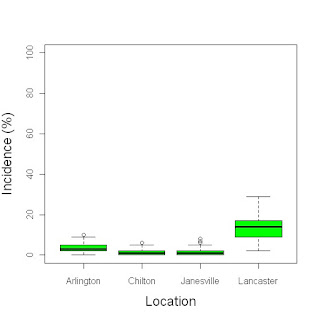 Figure 2. Severity of Fusarium head blight at the winter wheat variety trial locations in Wisconsin. The scale for severity (y-axis) is 0-100%, although the figure only shows from 0-20%. 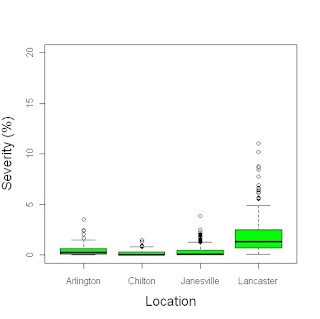 Figure 3. Fusarium head blight index, a measure of incidence x severity. Index values range from 0-100%, although the scale shown is only from 0-10% for illustration. 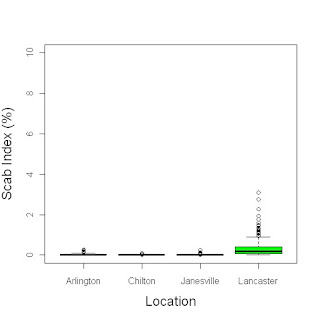