We have been receiving lots of reports of downy mildew of soybean throughout the state. Downy mildew is common disease of soybean that rarely affects soybean yield in the state. Based on our own observations and comments from growers and consultants, the increased incidence of downy mildew appears to be somewhat variety dependent. Downy mildew is caused by the fungus Peronospora manschurica. Symptoms of downy mildew are typically found on the upper surface of young soybean leaves. Spots of downy mildew are green to light yellow that can enlarge into bright yellow spots. Also, during periods of high humidity, the spots will look slightly gray and fuzzy when looking at them from below. As the lesions age, they may become brown with a yellow border. Depending on soybean variety, there may be a leaf distortion that may look like virus symptoms. 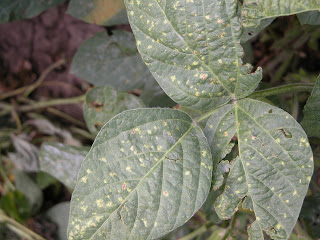 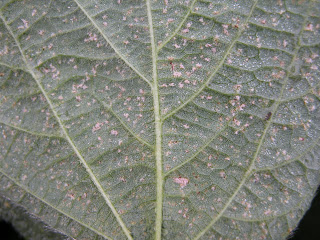 Figure 1. Symptoms of downy mildew as they appear on the upper and lower leaf surface (Image Source: C. Grau, UW-Madison).
Fungicides are not recommended for control of downy mildew given that it rarely reduces yield. Many of the questions we have received have focused on the use of an insecticide-fungicide tank mix and we would like to remind growers that it is important to base decisions for use of insecticides for soybean aphid on the established threshold 250 aphids per plant and that decisions for use of fungicides should be based on active scouting, identification and recognition of diseases that may reduce the soybean yield.
For further information:
Considerations for Spraying Foliar Fungicides in Soybean
Considerations for Spraying Insecticides for Soybean Aphid in Soybean