Late soybean and field corn harvest caused a significant drop in WI winter wheat acres in 2010. Many growers, including myself, still decided to move forward with late winter wheat plantings. To answer late-planted wheat questions we published the following article on November 23rd 2009.

As with many growers we had a difficult time getting all of our winter wheat planted in the “Optimal” planting date window in 2009. A significant number of winter wheat acres across Wisconsin were planted under the full knowledge of reduced crop insurance coverage as well as reduced yield. Given that the 10-day weather outlook calls for reduced temperatures as well as potential flurries I was interested in the “state” of our November 13th planted winter wheat in Janesville WI. In Image 1. we see that the radicle, seminal roots, and coleoptile have all emerged. In wheat the radicle and seminal roots will be the first structures to appear. Only after the seminal roots and radicle begin to imbibe water will the coleoptile begin to elongate.

For those winter wheat acres that were planted in the last few days remember that winter wheat will vernalize once the radicle emerges from the seed as fall growth will continue as temperatures fall to zero. Literature referenced: R.J. Cook and R.J. V

Today (3/18/10) I revisited our Janesville winter wheat site that was planted on Friday November 13th 2009. The wheat crop has emerged relatively uniformly and appears to have made it through the winter with very little crop loss (Image 2).

At this juncture the most critical decision facing growers is “Do I invest money into this crop?” Though I have no data that directly mimics this years situation we can use our 2009 planting date study as a starting point. In Figure 1 below we see that our late planted wheat (planted Oct 17th) suffered a 28% yield loss when compared to our early planted wheat (planted Sept 18th). Though our 2010 crop was planted 27 days later than the 2009 data what we can guesstimate is that your late planted wheat will likely yield at least 28% less than normal production levels. So your decision is “Can I still make money off of a wheat crop that is expected to yield ~30% less than normal production levels.” If the answer to that question is yes than it is critical to get across that wheat as quickly as possible with an early N application to stimulate tiller formation. It will also be important to scout early and often as weeds will likely be a greater issue in 2010 than in “normal” years. 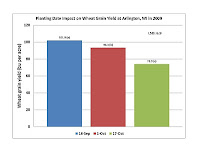