Winter wheat in Wisconsin is looking very good across the majority of our field trials. In some of these trials, we are already at the Feekes 4 (Zadoks 30, pseudostem erection) growth stage. This week, it was noted that there is some evidence of powdery mildew (see photos below courtesy of John Gaska) in some of these trials. This is an important period for some early-season management decisions (not just for foliar fungicides also). Specifically for decisions for disease management, it really starts with knowledge of the relative susceptibility of your wheat variety against powdery mildew. With that knowledge, a second step is to then determine how severe and where in the wheat canopy are symptoms of powdery mildew being noted. At Feekes 4-5, the recommendation for the use of a foliar fungicide is based on the appearance of symptoms of powdery mildew on the newest (i.e., upper) leaf. Scouting by examining approximately 100 leaves in a field from different locations. Assess the severity for each leaf by counting the number of powdery mildew pustules. If the average number of pustules is 10 or greater, this may indicate the need for use of a foliar fungicide. In most years, we often see symptoms of powdery mildew in the wheat canopy, but typically only in the lower canopy due to the microclimate and varietal differences. Disease management decisions at these earlier growth stages need to take into account the assessment of the most appropriate leaf material that may impact the flag leaf later in the growing season.

Photos from Arlington, WI (Courtesy of John Gaska, Dept. Agronomy). Notice that the primary location of symptoms are in the lower canopy. As discussed earlier, guidelines for the use of foliar fungicides are based on examination of the uppermost leaf. 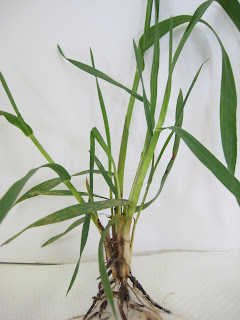 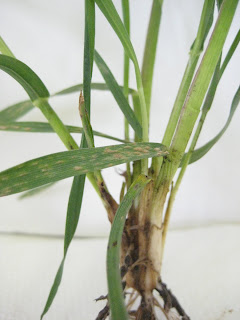 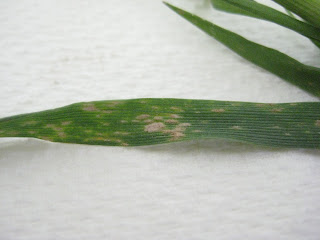