Blog
You are here: Home / Blog / Uncategorized / Effect of Freezing on Soybean Seed Yield and Composition

Greg Andrews from Pierce County received many texts from growers this morning that reported temps ranged from 23 to 29 across the county, 23 in valleys and 27-29 lasting from about 3am to 7am for much of the upland corn and soybean growing regions. His early observations in soybean fields with green stem and leaves indicated that cell rupture and wilting was already obvious (Images 1 and 2). The next question is how much yield loss will this injury translate to. Saliba et al. (1982). reported that the latest growth stage at which significant yield loss occurred due to freeze injury (80% leaf loss) ranged from R6.0 to R7.2 with an average growth stage of R6.6. For the most part the WI soybean crop is in the R6.5 to R7.5 growth stage. This suggests that there is a potential for yield loss, but the extent will be variety dependent. Saliba et al. (1982) also reported that the yield loss from this crop injury will be due to a reduction in seed size and not seed abortion. Lastly, Saliba et al. (1982) suggested no impact on seed protein or oil content when freeze injury occurred after R6.3. 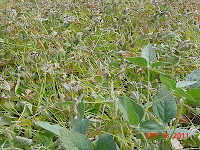 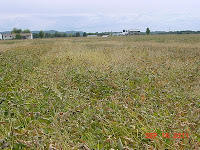 Given the dairy industry in the state some growers may consider taking the soybean as a forage. Just remember to contact your crop insurance agent before you do anything.

Potential for Soybean Yield Loss Due to Frost Don’t Let Your Harvest Go Up in Smoke!
Scroll to top