Early May planting in Wisconsin has been documented to increase yield due to increased light interception (Gaspar and Conley, 2015).  In theory, earlier planting can potentially intercept greater amounts of solar radiation due to a longer growing season and therefore longer maturity group (MG) soybean varieties may be better suited to maximize yield if they can mature before a hard fall frost.  2015 provide many WI growers with a longer than normal growing season due to favorable early spring planting condition and a later than normal fall frost.  Yet, in some instances (weather or logistical problems) planting can be delayed or replanting may be needed. Therefore, investigating the effect of different MG’s at multiple planting dates across the state would be useful.  Thus, DuPont Pioneer and the Wisconsin Soybean Marketing Board have funded a 3-year study to examine proper MG selection at 5 different planting dates across the state to maximize yield.  So let’s look at the 2014 and 2015 preliminary data:

Trials were conducted at Arlington, Hancock, and Spooner, WI.  The five planting dates at each location were planting roughly on: (1) May 1th, (2) May 20th, (3) June 1st, (4) June 10th, and (5) June 20th.  Planting after June 20th is not recommended in WI.  Two varieties within each realistic MG from a 2.5 all the way down to a 00.5 were tested depending upon the location and planting date and are displayed in Table 1.
I’ll start with the easy and redundant part, get your soybeans in the ground ASAP to maximize yield.  This is very evident again in this trial, where Figure 1. shows the effect of planting date across all MG’s (varieties) tested in 2014 and 2015.  Interestingly the yield decline for delaying planting was similar between years at Hancock and Spooner of approximately 0.46 and 0.23 bu/a/day, respectively.  However, at Arlington the yield decline was not as severe in 2015 compared to 2014, which was likely due to the abnormally late fall in 2015.  Never the less, if the soil is fit, soil temps are near 50 ˚F, and the forecast is favorable….. get the planter rolling! 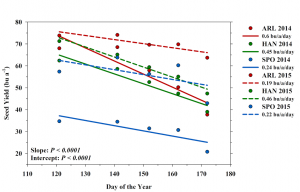 Figure 1. Dots represent the mean yield within each planting date for each location.  The average yield loss per day for delaying planting past May 1st is presented in the legend.
However, the question still remains for many producers, should I use a longer maturating variety in early planting situations (very possible again in 2016) and should I switch to an earlier maturing variety when planting is delayed?

Combining the 2014 and 2015 data, 8 out of 15 location x planting date combinations displayed a significant effect of MG on yield (Table 2).

At Arlington and Hancock, using the longest MG resulted in the highest yield within dates 1-4 and was significant 7 of 8 times. Within planting date 5 the shortest MG (0.5) yielded the highest numerically, but this was not significant and the MG 1.5 varieties did not mature before the fall frost in 2014.  Therefore, planting a portion of your acres to slightly longer MG than normal within May can provide the opportunity for greater yields with no additional dollars spent.  In addition, when planting is delayed into June, switching to a variety much more than 0.5 MG earlier than a full season variety (2.5 MG) may limit yield potential.  However, if planting is delayed until mid to late June or more likely replanting is needed, a variety that is at least a full MG earlier should be considered to avoid fall frost damage.
At Spooner, MG selection was not as critical and only planting date 5 saw a significant effect of MG on yield where the 0.5 MG out yielded the 0.0 and ultra-early 00.5 MG varieties.  Therefore, northern WI growers can maximize yield and avoid fall frost damage using varieties within a narrow MG range (1.0  – 0.5). However, growers may consider trying a slightly longer maturing soybean on a portion of their acres when early planting is possible, because of the “potential”, but not guarantee, for higher yields with no additional dollars spent.
In conclusion, variety selection heavily based upon the MG is not a silver bullet to increasing yields, however it does provide the “potential” for higher yields with no additional dollars spent. Therefore, growers should give consideration to MG when selecting varieties, but past local and regional performance, disease package, scn-resistance, and etc. should take precedence.
References:
Gaspar, A.P. and S.P. Conley. 2015. Responses of canopy reflectance, light interception, and soybean seed yield to replanting suboptimal stands. Crop Sci. 55:377-385.
https://coolbean.info/wp-content/uploads/sites/3/2016/04/figure-2B1..png 654 1024 shawn conley spconley@wisc.edu /wp-content/uploads/sites/3/2017/10/coolbean.png shawn conley spconley@wisc.edu2016-04-01 15:52:002017-10-19 15:45:13Soybean Planting Date and Maturity Group Considerations for 2016.
0 replies