Four out of every five animals on earth today is a nematode so it is not surprising that agricultural fields are home to many nematode species. Fortunately, most nematodes are beneficial to crop growth and soil health because their activities help decompose crop residues and cycle nitrogen and other nutrients. Pest nematodes do not threaten yield if their numbers remain low. The key to avoiding population explosions of nematode pests is to be proactive – know what the situation is and take appropriate measures when nematode numbers indicate a problem is brewing.
The WSMB sponsors free nematode testing to help producers stay ahead of the most important nematode pest of soybean, the soybean cyst nematode (SCN) (Figure 1). Eggs of SCN persist in the soil between soybean crops so a sample can be submitted any time that is convenient. The soil test report indicates the number of eggs in the sample and is useful for selecting the right variety for the next soybean crop. Retests of fields planted with SCN-resistant varieties over multiple years shows how the nematode population is responding to variety resistance and provides an early warning should the nematode population adapt to host genetics. 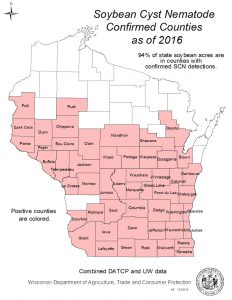 In 2017, the WSMB is again offering the expanded nematode testing program to include other pest nematodes in addition to SCN. These nematodes are less damaging to soybean than SCN but can cause enough yield loss to warrant treatment. As is the case for SCN, there are no rescue treatments for nematodes so the primary purpose of this year’s soil test is to plan for next year’s crop. Soil samples collected in corn for nematode analysis have predictive value for explaining yield if they are collected before the corn V6 growth stage. Sampling early in the season will provide information about the risk potential for the current corn crop AND the next soybean crop.
The assays used to recover nematode pests other than SCN in soil require that the nematodes are alive. So, it is important to keep the samples moist and at least room temperature cool. Collecting a sample that includes multiple cores ensures that there will be plenty of root pieces to assay. It is not necessary to include live plants in the sample. The soil test report will indicate which pest nematodes are present and at what quantities and their damage potential to soybean and corn based on the numbers recovered.

In 2017 the WSMB will use PestPros Inc. as the diagnostic lab for nematode quantification. Please discard all old kits and order now ones at the email address below.

Free soil sample test kits are available now and can be requested at (freescntest@mailplus.wisc.edu).

For more information on SCN testing and management practices to help reduce the losses from this pest, please contact: Shawn Conley: spconley@wisc.edu; 608-262-7975 or visit www.coolbean.info.

Remember the first step in fixing a nematode problem is to know if you have one! The WSMB sponsored nematode testing program provides you that opportunity.
https://coolbean.info/wp-content/uploads/sites/3/2017/03/2016-SCN-map.jpg 1024 791 shawn conley spconley@wisc.edu /wp-content/uploads/sites/3/2017/10/coolbean.png shawn conley spconley@wisc.edu2017-03-29 20:28:002017-10-19 15:44:45Wisconsin Soybean Marketing Board Announces Changes to the 2017 Free Nematode Testing Program
0 replies

Winners of the 2016 WSA Soybean Yield Contest are Announced