Heat units are a major driving force behind soybean and wheat development. Since May 1st of 2008 we are ~100 heat units behind our 20 year average and almost 200 heat units behind 2007. The long-term implications for this delay are dependent upon the rest of the growing season as we can easily catch up during a warm June. The biggest concern at this point in soybean would be early season soybean diseases. Paul Esker published an article in the WI Crop Manager discussing the potential disease issues in soybean. The biggest risk for cool wet soils would be pythium. In winter wheat the cooler than normal temperatures may lead to delayed harvest, however cooler than normal temperatures through grain fill may also lead to increased grain yield. 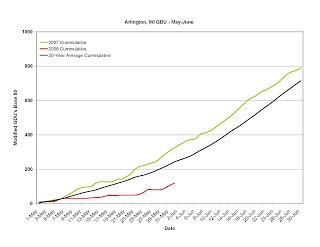