Blog
You are here: Home / Blog / Uncategorized / Phytophthora and Stem Canker of Soybean

As we move into the latter part of the soybean season, we have been receiving lots of questions and reports of Phytophthora root rot in soybean, including reports where the Rps1k gene has not been performing well. The weather we experienced this past spring into early summer increased the favorability for Phytophthora. While we have also seen reports about Rhizoctonia root rots, the main other stem disease that can often be confused with Phytophthora is stem canker (Figs. 1 and 2). There are some key differences between the two when scouting fields:

Phytophthora root rot: (i) infected plants are often easy to pull from the ground due to the root rot during the early infection, (ii) stem lesions are the key diagnostic symptom later in the season and include a brown discoloration that progresses 6 to 12 inches from the soil line, (iii) diseased roots are smaller than healthy plants and the taproot and lower stem are internally discolored, and (iv) this can lead to an open areas of the canopy.

Soybean stem canker symptoms: (i) first appear during early reproductive stages as reddish-brown lesions at the base of branches or petioles and are first noted after the petiole has dropped, (ii) as the lesion elongates, it will become dark brown to black forming a canker that is sunken in appearance and the stem often becomes girdled, (iii) foliar symptoms can include an interveinal chlorosis and necrosis due to the production of a toxin, (iv) above and below the site of the canker, the tissue remains green and while the leaves may wither, they will remain attached, and (v) unlike Phytophthora, stem canker does not cause a root rot, and this will also differentiate stem canker from diseases like sudden death syndrome.

In 2007, there were numerous reports of soybean stem canker in Wisconsin and a summary of information can be found in a Wisconsin Crop Manager article published on December 15 (Volume 14, Number 31). We are interested in learning about locations where Phytophthora root rot has occurred and if possible, the source of resistance in the soybean variety being grown. Please feel to contact either Paul or Shawn with reports in your respective areas. 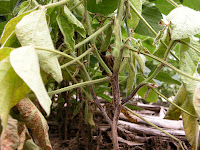 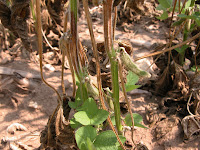