A survey of our central, north central, and northern soybean variety trial locations was conducted on 8/12/08 and 8/13/08. The soybean crop ranged between the R4 and R5 growth stages. Across most of WI we still remain ~150 gdu’s behind the five year average.

Soybean aphids were present at all trial locations. We have been monitoring our Galesville location for several weeks and yesterday reached the economic threshold of >250 aphids per plant. In a normal year our soybean crop would be developmentally far enough enough along that an application this late would likely not be warranted, however based on growth stage, building aphid numbers, and gdu’s an application was deemed necessary at this location.

Though much of the state has received timely rainfall the central part of WI has not been as fortunate. Several fields are beginning to show drought stress. Drought stress symptoms include a shortened soybean crop, lack of full canopy closure, and flipped soybean leaves (Image 1). 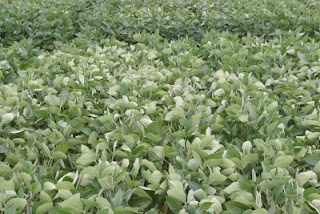 Sun scald was common across several of our locations. Sun scald or sun burn can be confused with Cercospora. Sun scald symptoms mostly appear on the underside of soybean leaves and often have a distinct line between the healthy and affected areas (Image 2). This line is caused by another leaf shadowing the affected leaf and limiting sun exposure. 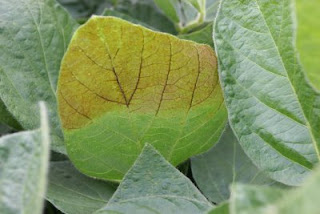 In our irrigated white mold trial we are just starting to see symptoms showing up. Image 3 is an example of early white mold symptoms in the field.
Image 3. White mold. 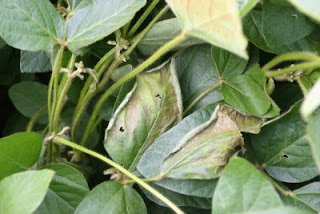 Lastly, the most obvious weed detected across the state in my windshield survey was volunteer corn. Not only will this weed cause yield loss but also remember that if weed populations are great enough dockage will occur at harvest.