Blog
You are here: Home / Blog / Uncategorized / Early Season Water Deficit Stress on Southern WI Soybeans
I went to bed last night hoping this article would not have to be written, but that whopping 0.05 hundredths (or less) of rain we received across much of Southern WI last night forced the issue.  According to data from the 2012 Weather Summary for UW ARS – Arlington and Marshfield WI Locations (compiled by Dr. Joe Lauer) we are tracking over 4 inches behind the 30 year norm at Arlington (precipitation from April 1 to today). A similar trend was occurring at our Marshfield location until recent rainfalls brought us back to near 30 year norms. The implications of this water deficit on soybean are as follows.
In soybean there are two growth periods for which soil moisture is critical for optimum growth and development: at planting and during the reproductive stages from bloom through pod fill.  The time period from stand establishment to bloom is not as critical.  Drought stress during this time period will often shorten internodes; however yield loss rarely occurs. Luckily most of the WI soybean crop is in the vegetative growth phases though bloom is beginning.  As stated above depleted soil moisture at planting can significantly impact the soybean crop. Therefore if this dry weather pattern continues growers should be very cautions about planting double cropping soybean into dry soil.
In Wisconsin the main reproductive growth in soybean occurs from early July to mid-September.  Soybean in this stage use about 1/4 to 1/3 inches of water per day.  Lack of sufficient water can cause flowers and young pods to abort reducing the number of seeds per plant (Image 1).  Also, soybean plants reduce the size of their leaf pore openings to reduce the loss of water vapor.  This also reduces the intake of carbon dioxide and the manufacturing of photosynthates which slows plant growth.  When normal soil moisture returns, normal growth is resumed.  This ability to reduce metabolic activity allows plants to tolerate dry spells without dying or harming their ability to resume growth when normal moisture returns.
Image 1. Pod abortion in soybean caused by drought stress. 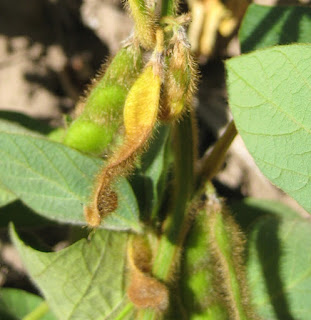 If a drought does develop and severely affects podset and seed fill, and if livestock feed is needed, soybeans can be harvested as a forage for ensiling.  Highest protein and yields are obtained from soybean harvested at the R6 to R7 growth stage.  Harvesting soybeans for forage between the R1 and R5 stage will result in very high quality silage, but dry matter yields will be reduced significantly.  Forage quality will be reduced from R5 soybean forward if a conditioning process is used during harvest.  Conditioning will cause significant seed shattering.
References:
Managing Drought-Stressed Soybeans in the Southeast.  North Carolina Cooperative Extension Service. 1999.
Virginia Soybean Update. Virginia Agricultural Experiment Station. Volume 2, No. 4, July 1999.
/wp-content/uploads/sites/3/2017/10/coolbean.png 0 0 shawn conley spconley@wisc.edu /wp-content/uploads/sites/3/2017/10/coolbean.png shawn conley spconley@wisc.edu2012-06-21 19:54:002012-06-21 19:54:00Early Season Water Deficit Stress on Southern WI Soybeans
0 replies