Blog
You are here: Home / Blog / Uncategorized / Should We Be Using Soybean Maturity Group as a Tool for Variety Select...

Over the last decade I have noticed a subtle shift across much of the northern soybean growing region towards planting later maturity group soybeans. This shift, either conscious or unconscious, may be attributed to earlier planting dates, relatively favorable fall harvest windows, and the drive for maximum yield as influenced by high commodity prices. As with all trends sooner or later, we have a correction year: 2014 was that year for many farmers. As farmers, consultants, and the battered and bruised seed suppliers sort through the plethora of product offerings for 2015, a common question arises: “In 2015, how much weight should we really give to maturity group in these seed decisions?”. For those of you with short attention spans like me, the short answer for soybean is not much….for the rest of you please read on to understand my reasoning.

In 2011, the WI Soybean Research Program published an article in the journal Crop Management entitled: “Optimal Soybean Maturity Groups for Seed Yield and Quality in WI” (Furseth et al, 2011). In this data set we looked at 893 varieties across 6 growing seasons (2004-2009) and three production regions in WI . Within each region we identified the optimal maturity group range for maximum yield. Those were 2.6-2.9, 2.1-2.4, and 2.0-2.2 for our southern, central and north central regions respectively.  After I make this provocative statement this is usually where the audience either falls asleep, starts texting their neighbor about the lame and inept speaker (me), or uses the restroom and fails to hear as the great Paul Harvey would say ……the rest of the story.

These data further support Joe Lauer’s assertion that “Every hybrid (or in our case cultivar or variety) must stand on its own” (Happy Thanksgiving JGL, you were positively quoted in a soybean article). In our recently released 2014 WI Soybean Variety Test Results book the maturity group range that included a starred variety (starred varieties do not differ from the highest yield variety in that test) was 1.9-2.8, 1.1-2.4,and 0.9-2.0 in our southern, central and north central regions respectively. This amplifies my assertion that the “relative” maturity group rating is trumped by individual cultivar genetic yield potential. 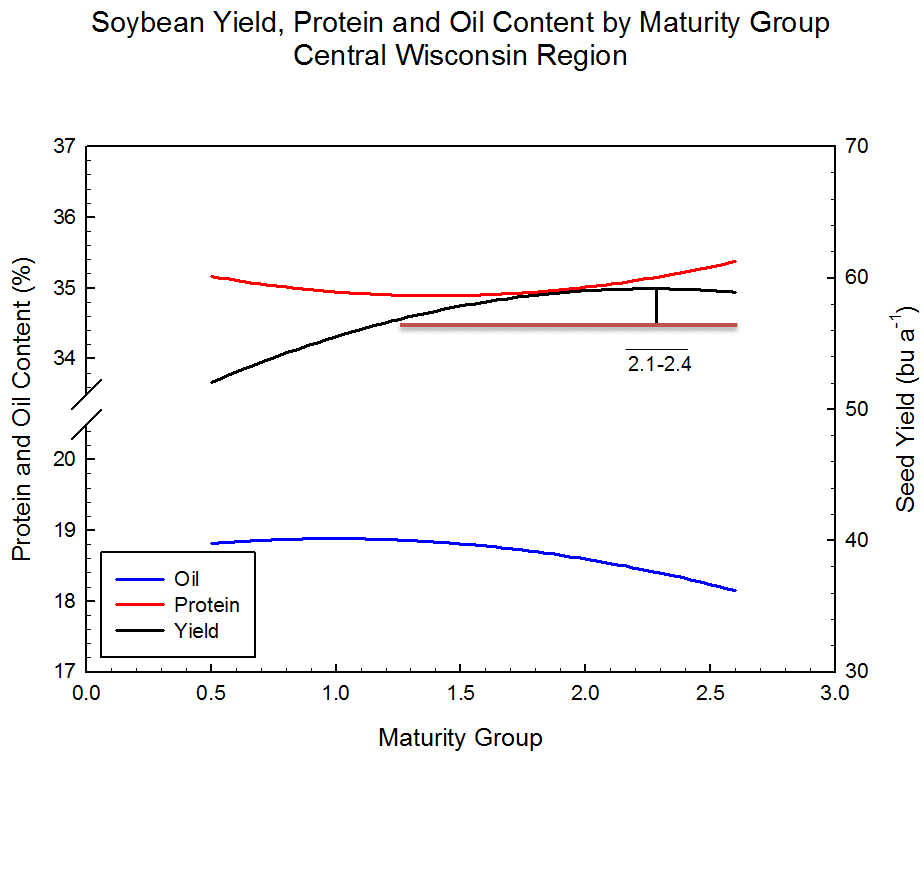 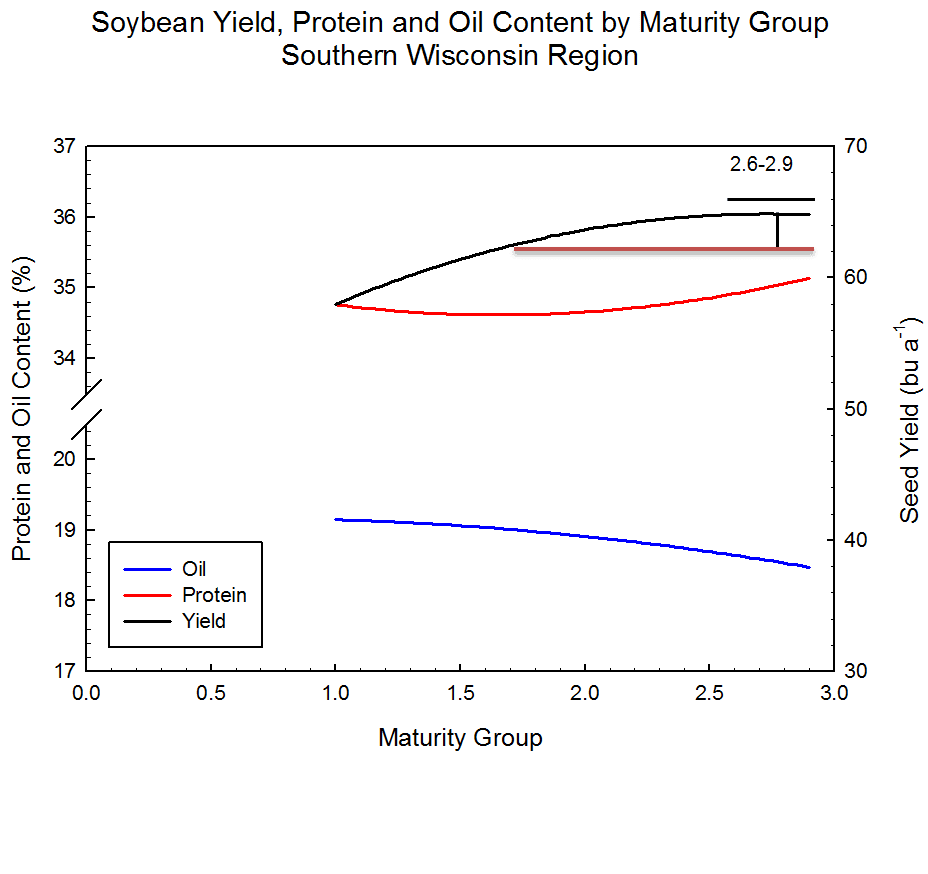 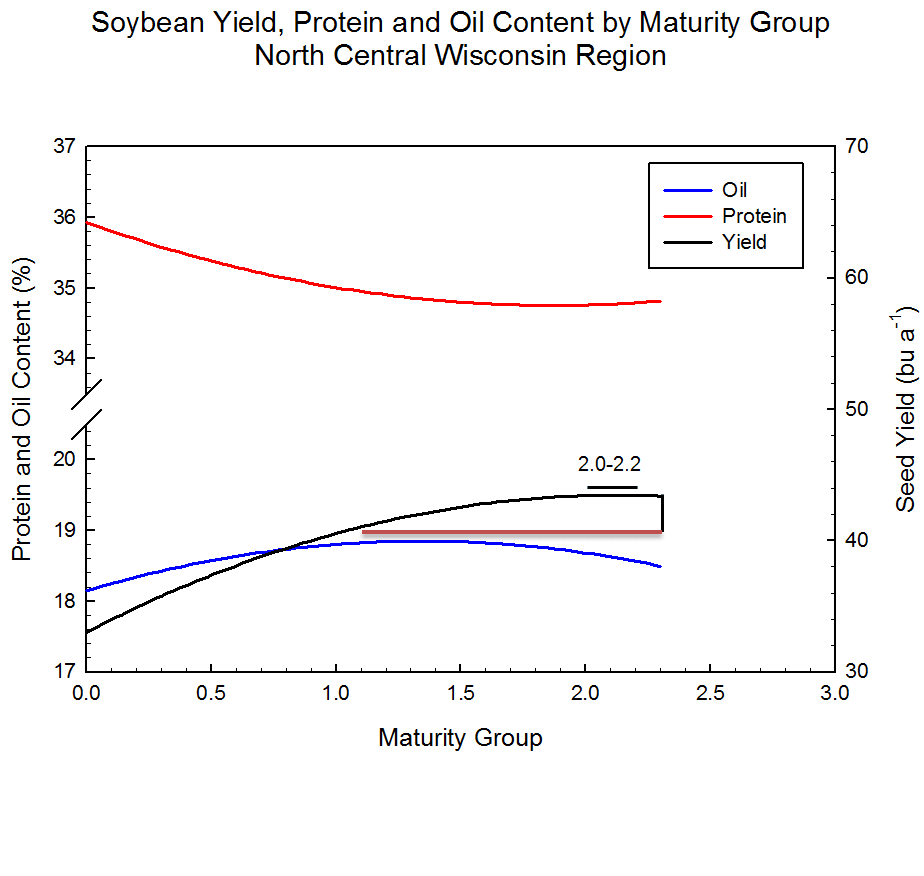 Lastly, since I brought it up lets also discuss our “relative” soybean maturity group rating system. If anyone has ever observed a multi-company variety trial in the fall, they may have notice many differences in maturity amongst varieties that have the same MG rating. For example in our 2014 Southern Region Glyphosate Tolerant Soybean Test we noted a 7 day maturity date range among all the 2.4 maturity group varieties listed. This may not seem important at the end of September, but in years when we plant late (Table 1), have a cool growing season and apply a fungicide those few days may matter.

As seed decisions are made for 2015, it is fine to keep the relative maturity rating on your check list, just don’t have it near the top!