We talk a lot about the importance of soil sampling, but we don’t spend much time talking about what happens to your samples after you send them off to the lab. There are a few different procedures for measuring potassium (K) and phosphorous (P), and knowing which method was used to analyze your samples can help you accurately interpret the lab results.

All methods we’ll discuss today for measuring P and K share some general steps. Soil arrives at the lab, receives a sample ID, and then is dried in an oven, ground, and passed through a 2mm sieve. Then the soil is mixed with an extractant that removes a portion of the nutrients from the soil itself, and then the nutrient concentration of the solution is measured. One common misconception about nutrient extraction is that these tests remove all the P or K in a sample. Extraction only removes a portion of the total nutrients in the sample. Different tests extract a different proportion of the overall nutrients, which affects lab results and soil test interpretation. Both P and K are usually in the form of cations, or positively charged ions, in the soil.

State nutrient recommendations are built with specific tests, and you will be better able to implement the recommendations of A2809 or your state’s nutrient guidelines if you make sure your samples are run using the same methods as your state guidelines. The good news is that nearly all commercial labs can run your samples using any of the methods described above. If farming outside of Wisconsin, check your state nutrient guidelines and the soil test they are based off of before you pull your soil samples. Then, write that method or check the box corresponding to the correct test on the submission form when you mail samples off to the lab.

If you have past soil samples that were tested using methods that differ from your state’s recommendations, you can convert because the different methods are highly correlated. The conversions for P are simple. Ohio State recommends dividing your Mehlich-3 P number by 1.35 to get a Bray-1 P value. This conversion is similar to conversions provided by Iowa State, and it should hold true for WI soils too. Olsen P can also be converted to Mehlich-3 P, using conversions from Ohio State.

The conversions for K are a little more complicated, since the sample’s clay content can affect K extraction. Dr. Carrie Laboski in the Soil Science Department at UW-Madison has done some work to correlate Bray-1 K with Ammonium Acetate K, and has found that multiplying Bray-1 K by 1.2 is a good way to estimate Ammonium Acetate K on silt loam soils (personal communication with Dr. Laboski). For sandy soils, she found that Bray-1 K and Ammonium Acetate K are approximately equivalent. 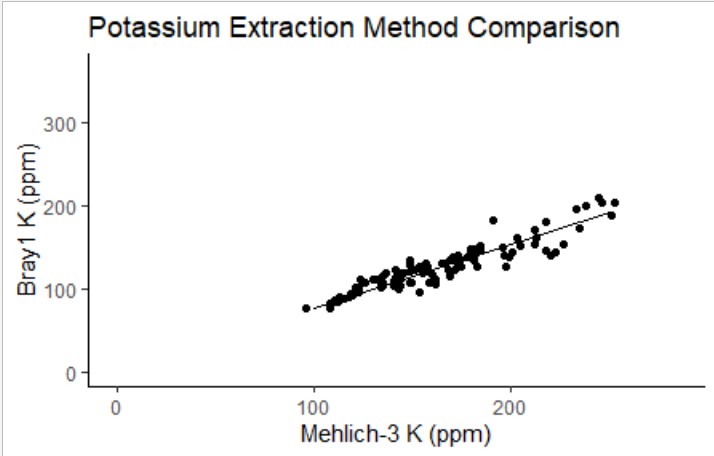 We are currently building a data set of Wisconsin K soil samples that have been run using Mehlich-3 and Bray-1 K. From 108 samples of loam and silt loam soils in southern WI, you can see that the extraction methods are highly related (R2 = 0.91, p < 0.001) (Figure 1).  A simple linear regression from this data set indicates you can get from a good estimate of Bray-1 K by multiplying Mehlich-3 K by 0.77 and subtracting 0.75. The data presented in Figure 1 should be considered extremely preliminary because all the samples came from three fields within the same county. That said, this data does show that simple linear regression is likely to help us develop a conversion once we have a larger data set.

It’s also interesting to note that both the regression and double-conversion method yielded very similar estimates of Mehlich-3 K from the Bray-1 K test results for these samples. But, all the samples in our data set so far were on loamy soils near or within the optimum range where we don’t expect to see a yield response to K fertilizer. Future data sets will need to be larger and more diverse so that we can understand the relationship between extraction methods on low-K soils and other soil textures. In the long term, accurate conversions between extraction methods can help us better utilize historical and multi-state data, adding value for farmers across the Midwest.

Winners of the 2020 WI Soybean Contest are Announced

The WSMB Free Soybean Cyst Nematode Testing Program is Back in 2021!
Scroll to top